Yarn spinning is the telling of Australian stories as per the idiom of our forebears from the city and the bush. They are often called tall stories.

Yarn spinning is not a connected line of jokes, nor is it rhyming verse.

Many bush poetry competitions have a yarn spinning category and it is a natural add-on for performers to develop in addition to their poetry performances.

What is a Yarn? 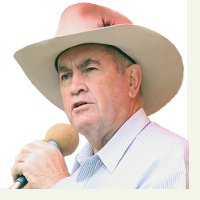 I often wondered in my early teens just what a “yarn” really was!
This word was used many times in our family to describe many different things. As a boy, whenever I was guilty of some misdemeanour, word of such villainy always beat me home to Mother. A little bird always told her when I had done something wrong.

I could tell by the sound of her voice that someone had dobbed me in, I knew that I had to tell the truth because she would know if I was telling fibs. Making a feeble attempt at a small lie to avoid the penalty, or even a “bloody great whopper” for that matter, or even if I told the truth, the whole truth and nothing but the truth, she would always come up with “That’s a yarn, that is!”
Even if I persisted with the truth she would still say “Don’t you come round tellin’ me yarns, young fella! You just wait till your father comes home!”

On Sundays when we drove to town for mass, the women would bung on airs and graces and strut around like emus as they bypassed all the “sinful” men standing outside the church, yarning with their mates. It was here the ladies developed a “holier than thou” attitude, and appeared to be in a state of grace, greeting each other in softer whispering tones as the bowed their heads and made their way into the church. They were all very righteous on Sundays. We kids would try to outsmart our mothers so we could stay outside and listen to the men “yarning”.

It was amazing jut how many of us had to go to the toilet whether relief was needed or not before hearing the word of God! The men would talk about the weather, sheep and wool prices, crops and tell stories and jokes they had repeated a hundred time before. There appeared to be no need for softer tones here. Then, when some holy old church warden would announce in a loud whisper from the front door of the church that “The Priest is coming” there would be an all-out stampede for the back seats as if there was some sort of a trophy for the winner. After Mass the women would go crook on them for yarning too long and for coming into mass too late. There was no hint of softer tones here.

Whenever Dad would go to the pub for a few beers, and stay well after the “six-o’clock” closing time he would come home in a happier frame of mind to Mum’s rousing and going crook, and he would say “I was only having a yarn with me mates!”
Come Christmas time, all the family would gather round, friends and relatives from all over the place would come.
They’d all be talking at the same time and there’d be lots of laughter and they’d slap each other on the back and say “that’s a bloody yarn, that is!” or, occasionally “That’s a good’n that is!” meaning much the same thing. They would talk about “how the kids have grown” and how Grandma hadn’t aged a day since last year and Grandma would say “Go on with you now, you’re full of yarns you are!”

So to me a yarn was just another story, an alibi, or a lie, another way of communicating — a way of expressing gratitude, kindness or just plain bloody well enjoying yourself, knowing that what you are saying is completely truthful, with some slight embellishment to enhance the story, should it have been told before.

To me a yarn doesn’t always have to have a punch line like a joke. It just has to hold the attention of the listener, whether he believes it or not. A yarn is just another way of enjoying yourself and your mates and giving life’s frustrations a good old kick in the backside.